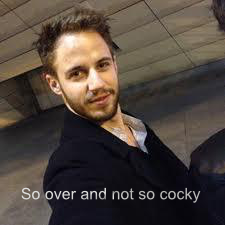 In my previous post I drew attention to a troubled twerp called Julien Blanc. He’s the guy who’s a self-called ‘pick-up artist’ who for years has been selling his services as a speaker, all across the world, to men who want to learn how to become a PUA themselves.  He’s in a whole heap of trouble after a woman (Jenn Li) objected to his methods, his language and his appallingly sexist and racist video clips that could then be found all over the web. She did more than just object, she set up a global, online petition to have him stopped. I asked what we could learn from him as presenters ourselves.  Click here if you can stand it to see a video of what Blanc says and does. Here are 3 core lessons-

Like that pissing puppy, maybe Julien Blanc got a bit carried away? Maybe he’s not as bad as he’s painted.  He probably is, but whatever the real truth it’s too late.  He’s tarred forever by this stuff, and all of us could remember and learn from his pain, humiliation and experience.

Here’s a link to Jenn Li’s work and thoughts that drew the world’s attention to the case.

What can presenters learn from Julien Blanc?
Geeks have the knowledge to change the world – but only with the right communication skills
To Top