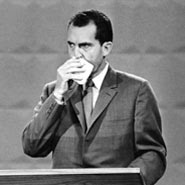 Philip Larkin, late, lonely, lovely English poet, wrote a short and bitter little thing that leads us into why so much rubbish is spouted to us by people who really should know better.  ‘This be the Verse’…

They F*** you up your Mum and Dad’
They do not mean to but they do,
They fill you up with all their troubles,
Then throw a few in extra just for you.

But they were f***ed up in their turn,
By fools in old-style hats and coats,
Who half the time were soppy-stern,
And half at one another’s throats,

Man hands on misery to man,
It deepens like a coastal shelf.
Get out as quickly as you can,
And don’t have any kids yourself.

Hmmm.  Larkin didn’t have any kids and he died friendless and alone, so let’s not use him as too much of a role model.  But it makes me think that we’ve all been taught things by people who, were doing what they thought was best for us, with the tools at their disposal, at the time.  Hindsight is the human being’s greatest gift, isn’t it?

Obviously a lot of what we’ve been told is valid but some, we come to realise, is just plain useless. I look round the great presentation skills blogs by my colleagues across the world (I’ll tell you who they are as we go on) and all of us seem to have a collected a few of the presenting  ‘myths’ to dispel, so here are 6 things that I was taught on my journey; by trainers who meant well; but that I’ve found to be fool’s gold as I’ve grown.

Where do most of these myths come from?  American political pollsters who look at politicians and how they ‘work’ on TV.  Their results, over time are then passed on to political advisers, who work with their politicians on very specific issues to do with the way they come over on camera. And guess what? All of the things I’ve listed above do look terrible on TV because there’s that really powerful, small frame, close-up, magnifying effect that TV has.

From Nixon vs Kennedy in the 60’s (we’re back to old style hats and coats) to McCain v Obama right now, the US election is a battle that’s won on the news networks, so it’s really important that candidates know the rules.

That’s where all this stuff comes from.  It’s all valid for TV and totally, completely, ludicrously irrelevant for us in the real world of work.

Lesson 6: Use everything in the verbal bag of tricks, but sparingly
Who should we look up to?
To Top