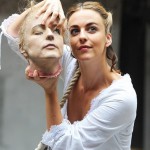 At the Tower of London again for a session on The Globe Theatre’s 2011 production of ‘Anne Boleyn’ with writer Howard Menton and star, Miranda Raison talking about the play and the theatre.  She said a really interesting thing about ‘connecting’ with an audience, that’s relevant to actors, but to us presenters in a business context too.  She said that the key to character, and to the play was that she ‘connected’ with the audience from the start.

The first scene of the play is Anne, walking on to the stage, alone, and talking to herself about something she has written.  She’s talking to herself, but talking to us too, and if she fails to bridge the gap between audience, actress and words, she’ll lose us, and the play.

She said that to succeed in a scene like this, actors mustn’t simply ‘talk to the dark’ they should speak the lines to real people in the audience as if these people cared, and lived and loved, and were real.  And they are.

It’s a great line because so often you see business speakers ‘speaking to the dark’.  General thoughts to a non-specific audience, with no ‘connection’ empathy or concern.  When we should really be talking (in Miranda’s words)-

”To the guy with the grey hair and nice smile, standing in the third row back, with the beautiful lady that I assume is his wife.  The guy I’ve had ‘a moment’ with as I walked on and looked at the people in the crowd…” 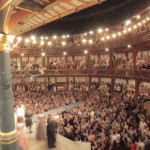 For context, the globe has 1600 spcaes for people to see the play, with 500 ‘groundlings’ standing right in front of the stage. Coupled with the fact that the Globe is an open-roofed theatre, therefore lighter than your usual dark theatre, makes for a wholly different relationship with the audience for the players.

But that makes it much more like a business presentation doesn’t it?  Where we can see everyone in the room.  So how well do we make a connection?  Do we get reviews like this?

The Independent on Sunday, 2010
“Her instant rapport with the audience goes down a treat.”

The Stage, 2010
“It’s a mouth-watering part for Miranda Raison to play and she does it with charm and gusto in a lavishly dressed production.”

Can you develop charisma?
How much to beat up our audience? Should we?
To Top