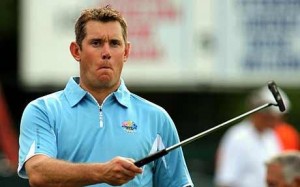 It’s not often that a golfer makes me laugh.  And even then it’s usually clothing related. I love the game but loathe the fake press conference ‘insight’.  And I don’t blame the golfers.  Journalists often like the easy option in a press conference and rehash tired old cliches and long-dead ‘incidents’ looking for a scoop.

But sometimes something brilliant occurs. Often it’s Lee Westwood who provides a slice of genuine wit and a gentle ‘slap’ to the raddled and bored writers.

Yesterday Lee provided two such moments.  First, here’s a great example of how to handle just such a lazy question.

For those who don’t know, Lee Westwood is the English World No 2 ranked golfer.  So he’s pretty good. At a pre PGA Championship press conference, he was doing his best to explain his mental preparation for the Championship and said the following-

“When you watch me putt this week, you’ll see me in a routine that I’m comfortable with, but you’ll see no trying.”

Some hack, looking for a ‘better’ soundbite then asked this ridiculous question-

“Erm, can you articulate that any better, Lee?”

Lee, a genuinely witty guy, but usually so away from the cameras and microphones replied,

“No. “I’ve tried to think about it but I’ve come to the decision there are no words in the English language to articulate ‘not trying’ which are any better than ‘not trying’.”

Now that is a brilliant riposte.  Well done Lee and good luck with the ‘not trying’.  Full article here and second example of Lee’s wit here.