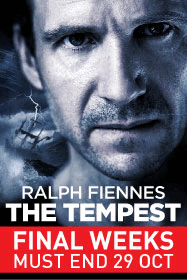 I saw Ralph Fiennes in Trevor Nunn’s production of  Shakespeare’s Tempest at the Theatre Royal, Haymarket, London last night. The whole cast was fantastic, and even the comic turns made me laugh, which is rare for Shakespeare.  The reviews were generally unenthusiastic, but it was my first ‘Tempest’, and I thought the production was great and the cast even better.

I’m struck, again, that Shakespeare, as much as anything, was a commercial playwright.  He understood that his audience decided whether he was rich or poor in the instant,  that if he left them waiting to be intrigued for too long, they’d leave the theatre and ask for their money back.  I’ve talked before about the importance of starting well, and Shakespeare uses the prologue to tremendous effect in most of his plays.

But the epilogue in The Tempest is an amazing example of a ‘presenter’ sending the audience away with ‘the point’ ringing in their ears…   Here it is and ask yourself at what point does the message stop being about Prospero and the play, and start being about Shakespeare?

Now my charms are all o’erthrown,
And what strength I have’s mine own,
Which is most faint. Now, ’tis true,
I must be here confined by you,
Or sent to Naples. Let me not,
Since I have my dukedom got
And pardoned the deceiver, dwell
In this bare island by your spell,
But release me from my bands
With the help of your good hands.
Gentle breath of yours my sails
Must fill, or else my project fails,
Which was to please. Now I want
Spirits to enforce, art to enchant,
And my ending is despair,
Unless I be relieved by prayer,
Which pierces so that it assaults
Mercy itself and frees all faults.
As you from crimes would pardoned be,
Let your indulgence set me free.

It’s a brilliant example of handing the power to the audience, and suggesting that they honour the playwright, the cast and the work. It’s an embedded command to love what they’ve seen.  To think in a certain way, and be kind with their power.  Brilliant.
When you’re writing a business presentation conclusion, be honest – ask your audience to do something for you. If you did your job well, at least a few of them will do as you ask.
This is a part of my Fit, Focus & Flair model. To be great, a presentation must be a perfect FIT for the situation; the content must have complete FOCUS on it’s purpose and message; and it must have enough FLAIR to stand out on the day, and in our memories. Learn more about developing your Fit, Focus and Flair.

Great presenters always tell lies. Don’t they?
Does your face speak an international language?
To Top