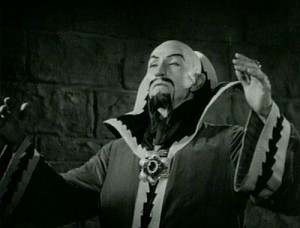 Ming may have been merciless, but the audience was worse

Oscar Wilde made a good point when he said that-

And as presenters we often have to do the same thing. We have a point to make and we want to make it powerfully and well. And if we have any soul we’ll realise that we’re not actually speaking the truth, but a twisted version of it to help us advance our argument, and to help the people in the plastic seats to be more successful at whatever they do. So making a lie seem like a plausible truth is a skill that great presenters have to have if they want to succeed. But sometimes we undermine our message by being fake in the doing. And our audiences nearly always spot it.

Actors have a word for it. It’s called ‘a tell’. It’s when an actor accidentally ‘tells’ the audience about something the audience doesn’t want or need to know, without saying anything. Like walking across a room for no apparent reason (to the audience) and then (surprise) the ‘phone rings. The consequence for the audience is interesting. If it’s a small ‘tell” then they may not notice, but if it’s really obvious, they’ll all notice and the whole performance will be undermined because the ‘spell’ of the theatre will be broken. The suspension of disbelief will fail. ‘He knew the phone was going to ring…’

For presenters it’s pretty similar. Our ‘tells’ are often our insecurities- that we try sooo hard to hide- peeking out from behind our smart suit and cosmetically enhanced smile (I’m talking about me here). The ‘truth’ about how we feel today, about ourselves, about our audience, life, love, whatever  surfaces for all to see. Now it ‘aint all bad.

There are congruent tells, where the subtle message reinforces the real one, like smiling sincerely and saying ‘I’m really happy to be here’, because you are; and such congruence makes for a powerful message. Then there’s the incongruent tell which (you won’t be surprised to hear) does the opposite and makes for some exquisitely awful moments.  Whether you do or whether you don’t, depends often on how ‘connected’ you are to the event.  People on ‘autopilot’ tend to be much more incongruent than those of us who work hard to ‘connect’. But I love seeing the occasional, incongruent tell too, because it amuses me, and reminds me that we all have good days and bad days.  So what are the funniest ‘tells’ that you see… Here’s my list of 6-

1. Our most important assets are our people… Translation- And we’re selling as many of them as we can because we can’t melt them down for candles.

2. This is all about you…. Often as the speaker points to himself like Simon Cowell- meaning it’s always’ all about me…

3. I have your best interests at heart… Accompanied by a psychotic smile and glacial eye contact- audience start looking for the door.  Ruuuun!

4. Trust me… – Obvious question- Why would anyone ask that of anyone else?

5. Maybe I’m a terrible person but… Translation- Obviously they are, just agree and walk away.

6. My primary concern is about making this right for you… Request- Well stop stabbing me in the back then…

Why would a speaker say any of these things unless s/he was nervous about displaying the truth? Watch out for these phrases and the incongruence in the voice, eyes, tone, scene, and see if you think the person really means what they’re saying or is simply saying something that she thinks we want to hear.  Tells are always telling.

[box type=”info”] Key Message- Be really tough on yourself in the writing and rehearsal. Notice if there’s a line or a part that you don’t feel right about. If you can’t say the words and sound sincere, you’ll ‘tell’ the world.  If that’s the case just say something else, anything else, or your message will be lost.[/box]

The best business presenters know that public speaking is Entrepreneurial Skill
What are the Presentation Skills I Need?
To Top