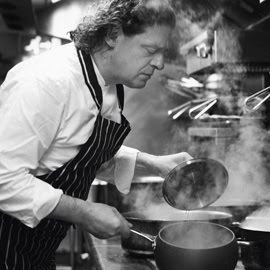 I love ‘Masterchef’, a televised cooking competition in the UK, where would be Michelin starred chefs are brought in, placed under lights and lightly grilled until they explode.  It’s great telly and I’ve learned a whole new language too.

I thought reductionism was what Marxists did in argument. But no, in cooking, as I’m sure you already know, reduction is the process of thickening or intensifying the flavour of a liquid mixture such as a soup, sauce, wine, or jus by evaporation.

I’ve also learned that in the highest-end restaurants it’s the sauce that makes the meal.  It’s not simply a matter of boiling merrily away though, as the cook’s dictionary tells us-

“…reduction does concentrate the flavors left in the pan, but extended cooking can drive away delicate flavour compounds, leaving behind less interesting tastes.”  So be warned, and here’s the point at last…

In public speaking, reduction is a skill that wil help even the most experienced presenter.  It’s the skill of being able to boil down a speech to it’s simplest, shortest essence where none of the ‘delicate flavours’ are lost.

It’s the 5-minute summary of the 30 minute speech, or the 60 second shortening of the quarter hour pitch.  Can you do that when someone says ‘just give me the 5-minute version…’  If you can then you’re as rare as a Michelin star in Birmingham (UK and Alabama, US of A).  If you can’t then it’s a good habit to get into before you start to prepare.

5 business phrases that make you sound like a corporate fool
Telling tales, particularly about yourself
To Top