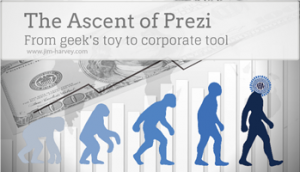 Prezi has been around for years now. I’ve used it lots for pitches and presentations and we’ve built a big chunk of global business over the last few years designing Prezis for massive businesses like JP Morgan, Mercer and State Street to use. I’ve been a fan of Prezi and a critic at the same time, and I have worked with Prezi and in spite of them, as they have developed the tool, and their business to the place it is now.

In 2012, in my book ‘Prezi, The Second Wave’, I said that Prezi needed to help their users to use their simple software to its best effect because most of the Prezis showcased on Prezi.com were actually terrible as visual aids. And that most corporate users had now heard of the tool, but at least 50% wrote it off as a nausea-inducing ‘toy’ that would not fit in their sane, safe world of corporate communications.  I also said that that would be a terrible shame, because Prezi’s few strengths would never be seen by that wider, and more importantly, paying audience.

Prezi has taken this advice on board and over the last few months there has been a noticeable shift in their thinking and doing. They now want to inspire their users to make great presentations, AND use Prezi in the right way. The Geeks have grown up.

It makes huge commercial sense too. If Prezi is to endure and make it to true global, corporate tool, it has to look like a professional piece of kit, and its reputation needs to move away from spinning and zooming hell. It is doing this in spades. Prezi demo’s, Prezi templates and Prezi policy has shifted to a cool, simple, infographic style approach that uses zooming in for emphasis and out for context as their USP. No more rotational sickness.

This latest demo from Prezi is a beautiful, elegant case in point. The Prezi could be used as an infographic. There’s very little text. The zooms are all straight in and out, and add emphasis and a little drama. Also the content is very good. It’s the kind of visual aid that a presenter could use for emphasis and impact, to support their speech.  It’s exactly what a visual aid should be.