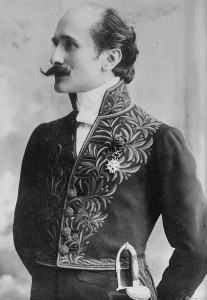 I’ve got a friend called Quentin.  He’s an actor and a good one too with a long track record of theatre, stage & screen roles behind him.  Actors can sometimes be a bit full of themselves but not Quenty, he’s a no-nonsense kind of bloke and when he says something to me with that special look on his face (like a bald bulldog chewing a wasp), I tend to listen.

We were working together with a group of high-end consultants preparing to pitch for a massive governement outsourcing contract in Europe. The pitch was strong, straight to the point and short.  The team was skilful and experienced and very good, with one crucial exception. Let’s call him Bob.

Bob was a technically competent presenter, with great experience in his field, but he was ‘performing’ , not presenting and he was borderline bloody awful. He was a classic example of the confident (but not really) presenter you see in corporate life.  Here’s what we could see with Bob-

Bob was a nice man off stage, but as soon as he got up in front of an audience he became unbearable to watch, and he didn’t know it.  As it always is, it became a matter of how do you broach the issue in a way that will allow him to learn, move on and do better for himself without losing him forever. Quent gave me ‘the look’ and I let him go.

Quent took him to one side for a ‘coffee’ and just asked him why he was ‘pretending’ to be something that he was not.  He wasn’t fearless, he was trying not to show his fear.  He wasn’t charismatic, he was trying to be charismatic.  He wasn’t compelling he was working very hard at being compelling and all of that effort to be something else, took away from his technical skill as a presenter and his honesty as a real human being- leaving a desperate impression.

Bob came back to the room a different figure. Thoughtful, slightly awkward, reflective and about 30 decibels quieter.  He gave the introduction again and his team were spellbound and applauded at the end.  Bob said to them, ‘What’s that for?’ and one of them said ‘for sounding like you mean it.’  Bob smiled and looked at Quentin and said ‘it’s his fault, he reminded me of the dictionary definition of confidence.’  ‘What’s that?’ said his colleaguue. ‘Con fides, in good faith.’ said Bob and Q said,

‘The problem for experienced and skilled presenters is that they often become ‘performers’ and switch off the thing that made them good in the first place, their warmth and honesty as a person.  Then they become like hammy actors…’  Everyone laughed and went on with the reheaesal.

Sometimes the only thing you can do is laugh: corpsing for professionals
When telling is a dead giveaway: someone’s trying too hard
To Top