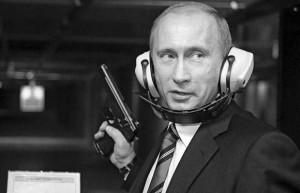 You’ve got to love Vladimir Putin haven’t you?  OK, Probably not. And maybe have some sympathy with him? OK, definitely not.  But you have to admit that he is bloody funny.

Asked to comment, in a generally testy press-conference,  on China’s huffy fit about Liu Xiaobo receiving the Nobel Prize for Peace, (well he won’t actually receive it, because he’s in one of their prisons for the foreseeable future) Vlad chose to make his point by comparing Xiaobo’s imprisonment with that of Julian Assange, of Wikileaks infamy, then detained in the UK because he’s wanted in Sweden to answer questions about two sexual assault charges.

Putin, sick of being asked to comment on human rights abuses in Russia and China by the one-eyed hacks from Europe and the US, reminded his audience that the West is always harping on to China and Russia about democracy, and ‘What’s this (the assange imprisonment). Democracy? ‘

But the really funny point was the way he chose to attack.  He continued, ‘In Russia we have an old country saying “our cows are not allowed to moo, but our neighbours cows are”’ a quaint, bucolic, saying that calls the West hypocrites in a contemptuous manner. Brilliant!

For the full story go here.

5 Really Simple Ways to Improve Your Presentation Skills
To Top