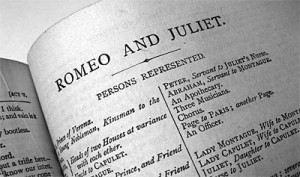 Everybody knows that stories have structure. They start with ‘Once upon a time….’ and end with ‘happily ever after.’ And in between the beginning and the end, comes the middle. In Western culture, most novels, plays and films tend to follow a simple 3 act structure, with each act playing a particular role in driving the story to its end. Broadly speaking-

Each of the acts allows the audience to be taken on a journey that starts with- ‘I Don’t know anything about this character and don’t really care what happens to the little bleeder…’; through ‘I care now and don’t want to see this lovely little thing fail’; to ‘Oh my God, is he going to fall, die, leave, lose, love…?’ To the bitter (or sweet) end of the story, where our emotions are released in joy or pain or hope…, and we can relax and go back to our lives with a lesson learned, or a message taken. But the story has to build step-by-step or it will fail.

Imagine the film ‘Toy Story’ going straight in at the scene where Buzz appears on the kid’s bed. It would have no meaning, because we wouldn’t understand so many things. Why his arrival changed things, why the toys were talking, who the skinny guy in the cowboy outfit was. We wouldn’t know and we wouldn’t care and we wouldn’t watch for long. Imagine ‘Titanic’ starting at the point where they’re all in the water; or ‘High Noon beginning with the gunfight. ‘Saving Private Ryan’ opening with the tedious walk through the hinterland of Omaha Beach, looking for a kid called Ryan.

Stories whether drama and fictional or commercial and factual work better if the thousand year old structure of a story is used.

P.S. I know that there are more than 3 acts in Shakespeare, and there’s a lot of controversy about story structures, Freytag’s 5 act structure and Quentin Tarantino’s method, but sometimes you’ve just got to choose. I did. For more information- try this–