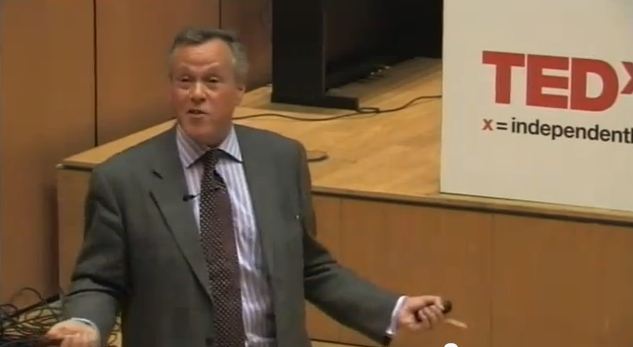 My occasional and much admired colleague, Charles Crawford, shows how using metaphor to make a powerful point, but gently, is an art that never loses it’s impact done well. To do it we have to understand 3 things-

Here Mr Crawford, stealing an idea from his teenage son, uses the laws of physics to explain why a certain European Institution doesn’t really work. (In his opinion). Watch the audience ‘get the point’ and see how well the point is made without hectoring, bullying or force.  Also, here’s a response from a disaffected scientist taken from ‘YouTube’ where the video’s hosted.

This talk is awesome, if you want to listen to the way the most simplistic, kindergarten-level straw man logic rouses an educated audience to applause. “The EU is big, so it moves less slowly”. Here, here! It’s just like in naive physics concepts, right? You had me at “EU bad.” Geez. The delivery is flawless, though.

I also love the charm with which he starts the piece in Polish and then honours the country and the people by showing he has thought about them before he arrived in the room, not simply changed the name on the slides to ‘Poland’ from Portugal.  Then there’s the unapologetic use of stories to drive his message forward.  A master-class. But not perfect as he says on his blog here…

Pretty gruesome watching yourself in action. But I have done so in the name of Science. Some interesting public speaking points emerge….

He then goes on…

First, I don’t want to cross swords with Max Atkinson in his many and varied expert criticisms of PowerPoint. This presentation shows the strength and weakness of the medium.

Above all, PowerPoint is kit-sensitive. Here the organisers did not provide a small laptop so that I could see what was up on the large screen behind me, hence I was having to look backwards and up to see what the audience were seeing – that rather broke the flow and the engagement with the audience.

Plus the speed at which the slides appear on the screen bears no necessary relationship to the way the presentation has been organised – it depends on the system being used for clicking on the slides and beaming them to the screen, and the efficiency of the presenter in doing the clicking right on cue. Here there were one or two awkward gaps/glitches.

Last but not least, PowerPoint is not easy to work with video clips. You need to be a lot better with a computer than I am to get that 150% right even in theory, let alone on the day. So I don’t risk it. A pity, since short video clips are a terrific way to explain a point.

Nonetheless, the slides in this case added value and engaged the audience with both eyes and ears. They were clear/readable and above all included numerous unexpected pictures, helping complement the presentation itself. Always good practice to let pictures rather than words make your points and tell your story.

Otherwise it comes across quite well, apart from one ghastly embarrassing inadvertent slip, which every Pole will spot – the perils of not reading from a prepared script.