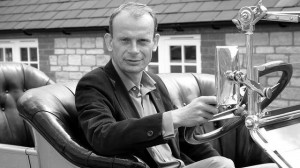 Andrew Marr, of the BBC,  is becoming one of the hardest to watch ‘car crash’ presenters in the UK.  He’s finely poised between horribly self-conscious and excruciatingly self-loving and I can only watch him with my hands over my eyes, through the gaps in my trembling fingers.

It’s not him as a person that I object to, it’s what he’s become as a presenter.  He’s changed since he’s been away from the restraining jacket of serious news, ‘Panorama’ (BBC’s flagship serious investigative programme) and a director who can control him.  As he’s become more ‘mainstream’ in the BBC ‘talent’ list, he’s been changing his style it seems, though whatever he’s done and why, I feel honour driven to tell him, because he’s unwatchable, particularly in his latest ‘History of Britain’ series.  Why is he unwatchable?  Because he’s trying way too hard to be a few things he isn’t.  Here’s what he isn’t-

Here’s what he is-

That’s what he should be on screen.  By putting on a silly hat he just becomes ridiculous and trivialises himself and his subject.  It’s patronising to all of us who are watching because we don’t need tricks in a political documentary, just clear thinking in the production team, a great script and simple delivery of that script to the camera.  So come on Andrew, save yourself and stop with the costumes, cars and drama.  It’s killing me.

PS- My friend David suggested that he’s brilliant in his Eponymous History of Britain on audio CD.  Point made.  Switch off the picture and he’s quite good, leave it on, and his gurning and undergraduate costume fetish is a terrible distraction.

George Orwell: suitable subject for a tattoo?
10 things to help you set up on the day
To Top