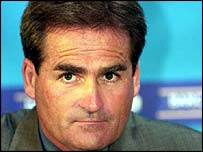 What a row! 2 of the UK’s best known sports pundits have, or about to, been fired for being indiscreet while wearing microphones. I don’t much like soccer, and I don’t much like what I’ve seen of Richard Keys (for 20 years, Sky Sports’ anchor for soccer at the highest level), but I’ve always admired Andy Gray, for his forthright views, clearly expressed. Yin & Yang? But he and Keys did sound like a pair of dinosaurs when discussing a female referee, and she was right in the decision they accused her of fluffing.

So they said some crass things off air, but on Mic.  They were recorded, it was leaked to the press, they got into trouble, Gray was fired, Keys may yet be (He resigned, before being fired).  But should we be sorry?  I don’t think so.

When you’re a professional presenter, you’re always ‘on mic’ aren’t you?  You say anything out of turn, before, during or after your speech, and you have to be responsible for it, don’t you?

George Orwell created 6 rules for writers, way back in the 1930’s.  The sixth of these rules is- break any of theses rules before saying anything barbarous.  The rules are as useful for broadcasters as for for writers.  And Keys can whinge all he likes about ‘dark forces’, but he broke one of Orwell’s, and society’s rules. For the whole, weird whinge, see here.

The price of public speaking!- Here’s 5 things that brilliant presenters have to sacrifice
The Secret to Connecting With an Audience – ‘They who honour me, I will honour…’
To Top