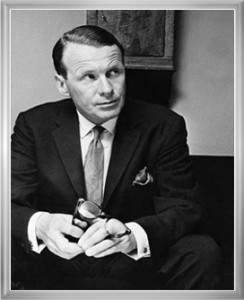 Holiday reading, staying in a friend’s lovely home in the green mountains north of Barcelona, Spain, I’d finished the crappy novel and trashy magazines I’d bought at the airport on the way out.  What next for my idle mind while the kids were splashing in the pool? I was ‘mooching’ in the library, and I saw the book lying there on Ronnie’s desk.  Unopened and unloved, apparently, I decided to cheer it up and give it a go.

For those of you who don’t know (and he is rather out of fashion these days) D.O. was the, Scottish raised, ‘father’ of modern advertising who ruled Madison Avenue in the US and a became the most feted, and highest earning, soap, hooch, car and airline ticket salesman for some of the biggest names in US business in the 19 50’s and 60’s.  Some believe that he’s the role-model for Don Draper, in the smash-hit TV series, ‘Mad Men‘.

The book- ‘Confessions of an advertising man’ is well written, short and highly opinionated (good thing in my view), and if you’re in business, and particularly a creative or service business, it’s worth 2 hours of your time.  My key outtakes are-

Outrage in the Sunday Telegraph- Professionalism emerges in the UK Civil Service
Principles- how quaint for a salesman?
To Top