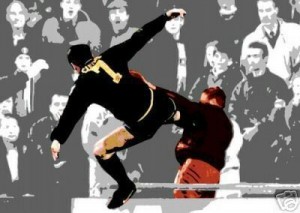 ''I noticed a very dangerous insect on his lapel...''

In January 2005, Eric Cantona, a gifted, French footballer, then playing for Manchester United, launched himself into the crowd at a thug who had spent minutes hurling the most vicious abuse at him.  He had had enough.  He had been spat at, mocked, insulted and he’d reached his limit.  For his crime, he was arrested, charged with assault, found guilty and fined by the courts, after an appeal to overturn his 2-week prison sentence.  The hooligan went free.

In a passing moment I’m often struck about how namby pamby we corporate speakers are.  We assume that we must be polite to our audiences, engage them, involve them and pander to their every whim.  Whatever they do to us.  I’m not suggesting the full ‘Cantona’, but what would you want to do about-

A stand-up comedian wouldn’t put up with it would he or she?  An actor would object (Daniel Craig stopped a recent performance in New York to ask for an audience member to be removed when his ‘phone went off).  So why do we put up with it?

A lack of confidence and balls I’d say.  So when I was at a nameless big corporate recently, and I watched 4 bankers interrupt a very senior executive, carrying their drinks and sandwiches, past 300 other audience members to find the only available seats at the front, without even a hint of an apology, I thought I’d do something.
The talk I was giving was on ‘Networking for Success’, and so I started with a scream and said ‘I’d be a hypocrite and a fool if I didn’t start by saying that the heart of my message is about self-awareness and courtesy.  So, who are you 4 gentlemen?’
I gave them a 2 minute description of what they’d done, and described in some detail the impression they’d created on me, their boss, their peers and their subordinates.  I summed it up with,
‘In short, you made yourselves look like ignorant, arrogant, ^&*$%^s…’  And I’m sure that wasn’t your intention was it?…’ Silence. Then one of them got up and said, ‘I’m sorry, it was rude and I’d like to apologise to the room…’ We shook hands and carried on as if something had happened.  And it had.  Truth broke out for a moment.
I thought I might have gone too far.  And found out afterwards that my client, and my audience agreed with what I did, and will remember the speech for a long time because of it.  Right then, who’s next?

What can presenters learn from Anne Boleyn?
Presentation advice from a 9-year old: Don’t try to be cool
To Top