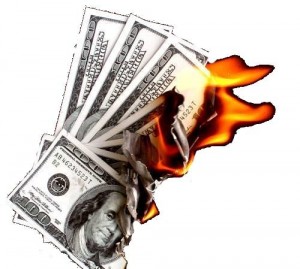 We really ought to pitch for this…just because you could pitch for a piece of work, doesn’t mean that you should, and how often are we asked to pitch for something that someone else thinks is a great idea.  Seduced by the fabulousness of the potential win.

I’d always be very nervous when one of my team bounces into my office at the gloomiest of times and says, ‘There’s a £4 million opportunity at Lapsang Souchong Ltd, we ought to go for it…’

It’s a bit like him opening ‘Vogue’ magazine, seeing the latest Croation Ubermodel and deciding ‘we’ should ‘go for that’.  You’re about as likely to score.  In fact, let’s follow that thought.

Imagine that one of your team brings you a torn out page from the fashion aristocracy’s favourite glossy. Let’s imagine he’s handsome, charming and witty too and often brings a really nice ‘friend’ to the Company Christmas ‘do’.  You’d still think he was loon if he handed you the paper, winked and said, ‘I’ve invited her.’

You’d probably say, ‘Really? Do you know her then?

‘Isn’t she going out with someone?’

‘Yes, Rodney Pigsbladder the soccer player, but I don’t think it’s that serious.’

‘Have you actually asked her?’

‘No, but I left a message on her Facebook page last week an she hasn’t said no…’ At that point you’d probably be reappraising your opinion of this guy.  So why do you listen to him when he suggests you go after the Lapsang Souchong account?  It’s the same principle-

* Things like doing client reviews with your real (rather than imagined) clients; running campaigns for your network of current, previous and lapsed clients; sleeping; going home early to spend time with the kids, that kind of thing- each of which is more useful than chasing fantasy opportunities for pitching into the wind. And pretty woman is just a crap film.

How an embarrassing moment with a client helps you get real feedback on how you’re doing
How well can you expect to do if it’s the first time you’ve said those words out loud?
To Top