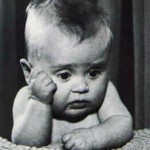 I’ve been running my own businesses since I was 25. I didn’t choose to but I was made redundant in the last big recession in Europe (1989-’92) and the consulting firm I worked for went bust in week 2. Brilliant!

What’s a boy to do in that position? I just fell into doing small pieces of work for ex-colleagues and new acquaintances and that was it. I became ‘something other than a full-time employee’ as I used to describe my work at the time. And because I hadn’t planned it, didn’t know what I should be doing, had no-one relying on me to feed them, was young, I didn’t worry. So what happened?

Why, when I go to see my doctor does he tell me that my blood pressure is slightly high, but normal for the self-employed? Well I moved on from being a carefree, irresponsible youth, to a man with ‘stuff’. I started having hopes and expectations about my work and life, employees, a wife, kids, offices, clients, friends, a reputation and, like that donkey in ‘Buckaroo’, each successive bit of baggage weighed me down just a little bit more. (Don’t worry this isn’t an ‘I made it through the rain’ type story) It’s just that I came across a really interesting article in The Times (London) a couple of weeks ago and I thought I’d share it with you.

The article was entitled “Do you worry about everything? Worrying is the most prevalent mental-health issue”

and it talked about something called generalised anxiety disorder, or GAD (that is, constant worrying about all the things that might go wrong). GAD, apparently has become the most prevalent mental-health problem in the world — creating an “anxiety epidemic” that has been blamed on everything from the recession to the advance of technology and the buyer’s remorse we have christened “affluenza”.

I’m not going to go through the article now, you can read it here if you’re interested- http://www.timesonline.co.uk/tol/life_and_style/health/mental_health/article6365262.ece, but the idea was that the journo asked a few ‘experts’ what they thought the answer was. She asked an author, a models guru (?), a personal coach* and they all thought it was about self-esteem. But they also asked the deputy director of services from ‘The Samaritans’ for his opinion (a credible witness if ever there was one) and he didn’t think it was about self-esteem at all. He said it was about thinking patterns, i.e. the way we respond to threats. He said

“…the more anxious somebody is, the more rigid their ways of thinking become — we encourage callers to think about what else could happen. It’s called ‘cognitive flexibility’, the idea that nothing is black and white, and can generate other, potentially positive, outcomes…’

Interesting eh? So if you’re worrying about something or everything try thinking of different ways of thinking about the thing, and dealing with it. Or at least look at those night sweats as a sign that there’s something else you might be doing rather than simply worrying.

What makes something relevant to business audience ?
What happens when you fall off the stage? Public speaking disasters and how to deal with them
To Top