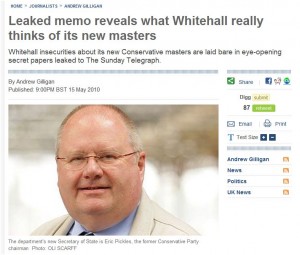 Whitehall insecurities about its new Conservative masters are laid bare in eye-opening secret papers leaked to The Sunday Telegraph.- Apparently!!!

Here’s what the spleen-venting, deranged Sunday paper thought about finding out that one UK government department was preparing plans to build a working relationship with the incoming Minister and his team…
‘The documents, instructing senior officials at the Department of Communities and Local Government how to woo their new bosses, give a checklist of what are called “hot button”, Tory-friendly words, to be dropped into conversation whenever possible. These include “families,” “radical,” “neighbourhoods” and “progressive.”

The briefing – supposed to be kept strictly from ministers, but leaked in a nanosecond to the horribly anti-Cameron clegg coalition, Sunday Telegraph– shows that DCLG officials are worried about their new bosses. “Do they like us? Want to work with us?” it asks, adding: “There may be challenge over our part in what they see as failed policies/ delivery.”

To overcome this, civil servants are told to “talk of efficiencies / value for money without prompting” and advised to deploy blatant flattery, with suggested phrases including: “Congratulations! I had so much confidence in you, I might get complacent!”

The documents order mandarins to “smile!… Lean forward!… Be interesting!” They are told to engage in “supportive listening,” and “take cues from the Secretary of State.” Officials are advised that “eye contact [is] the real currency.” ”

Obviously because it’s decades out of date.  Surely the real scandal would have been if there hadn’t been a plan to help the seriously under threat DCLG (Rumoured to be facing 20% budget cuts over the next 2 years- Ouch!), meet, understand and bend to the will of their new ‘masters’?