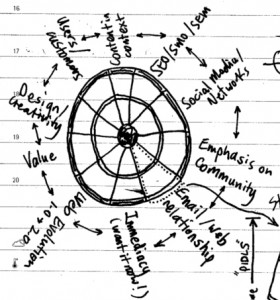 Dinosaurs died out a few million years ago didn’t they? Why?  Because they didn’t know what was coming and had no defence against the cold.

How many dinosaurs in our business are dying from the cold right now?  Millions I’d guess.  Leviathans with fancy offices in London, New York, Paris Munich… (everybody’s talking ’bout….), and the lone-wolves working from homes in Dudley, DesMoines and Dakkar.  The modern day diplodoci are often ending up as scavenger meat needlessly, and that’s the real tragedy,  because they could see what was was coming but they failed to act decisively.

Paralysis in the face of danger is a common occurrence in tragedy.  The fire deaths with a smoke alarm where the batteries had run out and never been replaced; the drowning where the victim had a life jacket in a locker on the boat but never thought he’d need one because he was a strong swimmer; and the motorist who didn’t put on her seatbelt because she was only travelling 500 meters to the shops.  Truly awful, simply avoided.

So if you’re struggling and want to stay alive here’s a one question for you, assuming you have some kind of professional network and even the simplest of marketing plans-

Are you using all of the tools that are readily available, mostly for free, in this digtal age?

There’s free e-mail marketing programmes from Microsoft and many others, there’s the free facilities offered by the ‘social networking’ sites like LinkedIn and Twitter, there’s blogspaces, subscription services and so much more to help you survive the winter.  So look around if you’re not using them, and ask yourself- What more could you do?